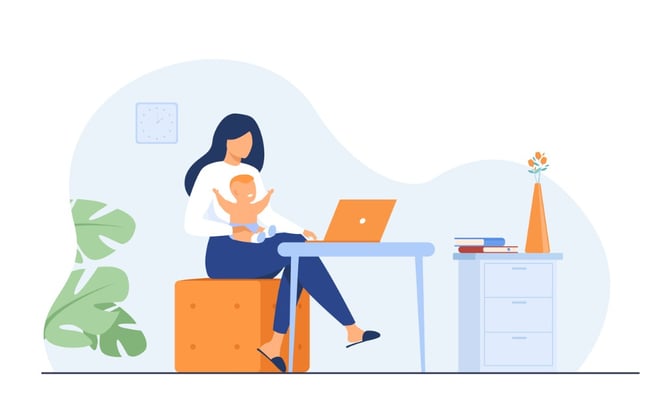 This is part 5 of our 7-part series in celebration of Women’s History Month.

These women’s stories will not only educate, but inspire. Read on to learn how Chris Boyle and Kate Assaraf found their ways to financial independence.

When women decide to have children, their lives are transformed forever. Their lifestyle and priorities will likely change—but for many women, the greatest impact will be seen in their careers and finances.

Regardless of whether a woman is a stay-at-home or working mom, the reality is that they’re going to work—a lot. Here are the average numbers moms put in:

Being a mom means working very long hours, both at home and in the office. This can often impact a woman’s career trajectory. One study found that having a child can make your income fall as much as 25 percent, which can in turn curtail your ability to build wealth.

Financial literacy is essential for all women, but especially those who choose to be mothers. Building wealth should go hand-in-hand with building a family—and it’s important for women to teach their children how to do the same from a young age as well.

We interviewed two successful mothers to learn from their experiences and gain insights into their struggles and triumphs. Chris Boyle is the President of Home Lending at Roostify, a Gen Xer who’s raised five adult children. Kate Assaraf is an environmentalist, a millennial with boys aged three and five. These women have striking similarities—both highly successful, intelligent, loving mothers who come from immigrant families—but are on very different journeys. Their stories showcase some of the common challenges faced by moms and how they found ways to make it work.

Both Chris and Kate have deep connections to the American immigrant experience.

Chris is an immigrant herself—she arrived in the United States at five years old. Chris recalls her classic immigrant story: “My dad took his wife, two children, and $50 and came for the American dream.”

While her dad had job offers all over the country, he ended up taking a job in “the wild, wild west, where John Wayne lives, which is Buffalo, NY.” Or so he thought.

Her dad made a good living, but whenever the family wanted something that was outside of their budget (like a trip back to Scotland to visit the family), he would take on an additional part-time job. This made Chris very aware of finances, because they lived very conservatively—well within their means.

Her father was opposed to giving his children an allowance. When it came to choresher father considered that table stakes. They were not something to be rewarded—chores were simply a requirement of being part of their community. As a child, she said, “you had a role to play, you had a job to do, and I always felt like school was my job. My education was my job.”

While Chris’ financial education was more experienced than formal, the lessons stuck. She owes much of her success to her father’s financial conservatism and used these lessons to build a framework for her own children’s financial literacy (which we’ll see in a bit).

Kate, on the other hand, is the only American in her family. Her Persian father and British mother were both immigrants, and her siblings were all raised in Iran. This gave her a rich and unique background.

The first eight years of Kate’s life, she lived in a nice house with a pool. But when her parents divorced, everything changed—including her social status. “The first time that I really understood that there was money outside of a purse was when my parents divorced.”

Kate’s life became a dichotomy. On weekdays, she lived a humble life with her mom, a creative, anthropology professor and linguist who spoke eight languages fluently, but who was also struggling to make ends meet. “We were one of the poorest families in our neighborhood—we lived in this tiny bungalow, and I didn't have all the comforts other people had.” The “comforts” she’s referring to include things like TV and hot water.

Then, every other weekend, she lived with her dad, a wealthy Persian businessman. “I kind of had this other life. My dad’s house had marble and chandeliers, and we’d go on shopping sprees.”

This experience gave her a crash course in American wealth discrepancy from a very young age. “I was hyper-aware of finances, more than I should’ve been.”

Motherhood and career: finding the balance

The choice between motherhood and career is not always binary—oftentimes, women need to work to find a happy medium. When you consider the costs of child care, pregnancy discrimination in the workplace, and the difficulties returning to work after having children, there are a lot of factors to weigh.

With five children, Chris didn’t have the financial backing to be a stay-at-home mom. She continued working, but family was her priority. “I put my family, consciously, ahead of a career, but I didn't put it ahead of continuing to hone my skills, broadening my horizons or the gratification and intellectual stimulation of having a job.”

When she was at Freddie Mac, she was fortunate enough to be able to work from home after her second child with a flexible schedule. This worked for her—allowing her to raise children, but still be successful at work.

At the same time, being a mom meant making certain career sacrifices. “I made some choices not to pursue money or title or status. I pursued skills and development and learning.” She chose to not take any promotions during this time, which impacted her finances. It wasn’t until her youngest graduated from college that she was able to completely focus on her career.

Ultimately, however, Chris got the best of both worlds—she got to be an active, engaged mother and, eventually, achieved a C-suite position with Freddie Mac. It took patience and persistence, but her development and hard work ultimately paid off.

When Kate decided to take a break from her full-time career to take care of her kids, it was a personal choice. “In my upbringing, the mom sacrifices work to take care of the kids. Even though I had a career, I put that on hold and just did consulting for a while.”

It’s an unfair double standard. “The expectations for women are weird, as if their pies are bigger. You can’t have more than a 100% of 24 hours a day. It just doesn’t work.” And yet, that’s exactly what women are expected to do.

Still, though, Kate finds time to consult and work. Much like Chris, she’s found a way to continue to build wealth and support the family, even while prioritizing her role as a mother.

Teaching kids about finances: managing money from a young age

Kids learn about money fast. According to PBS, by three years old, kids already have a conceptual understanding of money, and they may already have established monetary habits by age seven. That means that early financial literacy is essential to getting kids off on the right track.

Growing up, Chris and Kate had a more experiential education in personal finances. When they became moms, however, they took a much more formal approach.

Working in the mortgage industry, Chris knows the importance of credit and financial literacy. That’s why she taught all of her kids how to manage the money from their summer jobs and navigate credit card payments from a young age.

When they went off to college, she gave them money, but it was important for them to understand that this was their money. As she describes it: “I gave them personal accountability to make decisions and sometimes make really bad decisions. But my goal was to make those early on, in a controlled, safe environment so that they weren't blowing themselves up at 40 years old.”

Chris believes these lessons are important to learn young. As she puts it, “We all make mistakes, but understanding that none of them are insurmountable and you can always make money is what really matters.”

Growing up, Kate saw two very different extremes of financial stability. No one taught her about home ownership or personal finance directly, so she had to figure out much of it on her own. For her two boys, aged three and five, she’s making sure they have an intimate understanding of personal finance from a very young age.

Lesson number one: the value that hard work pays off. Right now, her five-year-old son is learning how to read. So, she offers him a choice. “If you read the story, we’ll pay you a dollar. But if you want us to read it to you, there’s no money.”

She makes sure he keeps a log of all the transactions. That way, he learns how to effectively manage his finances. Over time, he can see the cumulative effect of his efforts. “It’s really important for them to understand that they need to earn it. There’s no rewards for nothing.”

They also make sure to show the value of something already bought. “You have a toy and, whether you like it or not, that toy has a financial value assigned to it. Someone had to go to work and buy that.” How do they quantify it? They equate it to the unit of currency they taught him to understand—books read. “This toy is worth, for example, 50 books that you read. That’s how I try to show him the value. We’re trying to teach them not to think of things as disposable.”

Motherhood isn’t easy—especially when it comes to building wealth. But with adequate financial literacy, the process becomes much smoother.

Chris and Kate tackled motherhood in different ways. Both, however, kept the same core philosophy—family comes first, as much as that’s humanly possible. They found ways to navigate career and financial difficulties faced when starting a family. It took putting certain things on hold and making some sacrifices, but ultimately, they made it work.

They’ve also both made a considerable effort to train their children in financial literacy. This is a reminder to all of us—both institutions and individuals—to promote financial literacy, especially in young women, to empower them to make smart financial decisions. We can (and should) be better at making sure everyone has the educational baseline to be financially independent.

Stay tuned for the next post in our Women & Wealth series.